You are here: Products Fairy Lullabies 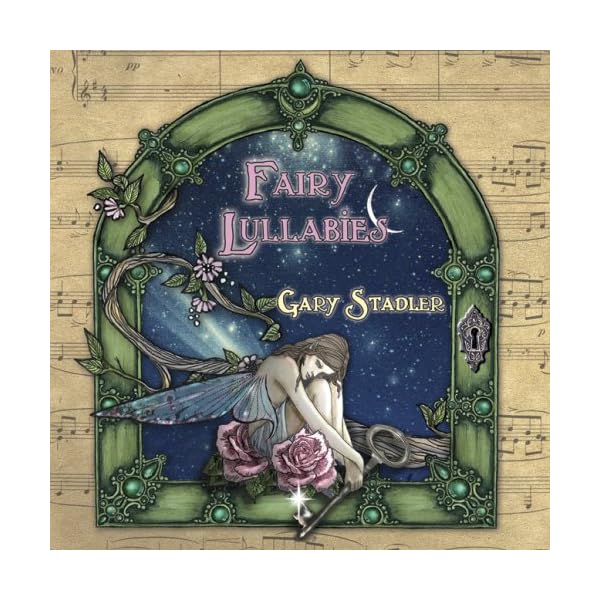 Embark on a sweetly relaxing journey into the enchanting world of Fairies that will touch your heart with its innocent beauty. Award-winning composer Gary Stadler has responded to requests from his fans and created new instrumental lullaby versions of some of his most loved melodies plus one new song. The result is serenely enchanting music that will soothe both children and parents alike. Garys soulfully beautiful melodies will guide you into a mystical world of dreams where you touch gently down into the heart of the Fairy realm. Fairy Lullabies is perfect for calming kids for naptime or tucking them into bed for the night. More than just lullaby music for children, Garys tender piano, keyboard orchestrations and Enya-esque vocals along with special guest Lisa Lynnes Celtic harp create a peaceful atmosphere in the home – also ideal for yoga, massage and meditation. Lay back, close your eyes and drift away .

“…unbelievably soft, dreamy and sweet…its hard not to be enchanted by this music – ideal for relaxation.” — Music Design In Review

“Garys talents for symphonic wizardry have made him one of the new millennium’s forerunners in New Age music.” — MacKenzie Wilson ~ All Music Guide

In “Fairy Lullabies”, the artist offers us his mastery at creating a work full of beauty and mystery, with themes that in some occasions tend to be of a melodic romanticism, while in other instances they have an enigmatic air. Listening to this album is traveling throughout musical tales whose landscapes are set in the world of fairies and other lands of a supernatural character. The music is bright, full of emotions. One of the most impressive pieces in the album is, in my opinion, “Garden Lullaby.” — Sarah Tomblin

“When I was little I used to sneak a crystal radio under the covers at night, and listen to its music to put me to sleep. Mom and dad never knew. Back then I was not very interested in Fairies, but now I am! So I’ve taken some of my favorite sleepy time songs and turned them into little lullabies for you, in hopes that the music of the fairies will take you into their land of sweet dreams when it’s time for bed.” ~ Gary

As a pianist, composer, songwriter and producer, Gary Stadler is a strong influence in the genre of contemporary Celtic music. Gary has continued to grow as an artist and refine his music, combining melodic elements of rare world instruments and symphonic wizardry to become one of the best selling composers of Celtic inspired music today. In 1993 Gary wrote the songs, Dream Spell and Awakening, for a stage play produced and performed in San Diego entitled “The Goblins Bride”, based on Celtic myths of the realm of “Faerie”. Over the next few years he crafted more songs based on this theme, creating the intimately mysterious piano and synthesizer bliss found on his first album, Fairy of the Woods, released by Sequoia Records in 1996. Garys heartfelt piano and sensitive orchestrations were well received by fans of New Age and Celtic music. New Age Voice Magazine wrote: “Strong and compelling melodies and lovely synth orchestral settings make Gary Stadlers Fairy of! the Woods a magical charmer. Stadlers melodies and arrangements are classically structured, but his orchestrations offer a colorful imagination the opportunity to inhabit the auld Celtic realms of fairies and wizards, glens and caves, fireflies and stardust.” Vacationing in Hawaii the following year, Gary met vocalist/guitarist/songwriter Singh Kaur, known to New Age listeners for her “Crimson Series” of acoustic recordings. Enchanted by her pure voice and talent Gary invited her to join him in his second album, Fairy Night Songs, released in May 1998 by Sequoia Records. Steve Ryals for New Age Retailer wrote: “Kaur and Stadler bring the healing mystery of the fairy folk to life. Kaurs voice soars like fairies dancing on gentle night breezes, with lyrics and pure vocalizations. Stadler composed most of the music and contributed string bass and cello to his keyboards and piano. The 16-page cover booklet is filled with entrancing art and complete lyrics. Fairy Night Songs is absolutely exquisite from beginning to end.” For his third record, Gary collaborated with Stephannie, a young vocalist and songwriter with a unique talent: by recalling her dreams she composes lyrics in a new language of Celtic fantasy no one has heard before.! Together they recorded a delicate and innocent sound. With Garys incomparable piano melodies, Stephannies enchanting fairy language, and joined by the renowned Celtic harpist Lisa Lynne, Sequoia released Fairy Heart Magic in October 2000 to a warm reception by fans and retailers alike, and saw a chart position on Billboards New Age Top 25. The CD is enhanced with a CD-ROM section that offers two bonus songs in MP3 format and additional artwork. In the fall of 2003, Sequoia released Gary Stadlers eagerly awaited fourth album, Reflections of Faerie, which, once again, features his pure piano sound along with the lovely harp artistry of Lisa Lynne. This recording heralded a return to his original instrumental pieces reminiscent of his first release Fairy of the Woods but with a deeper and more intimate feel. Gary has recently completed his fifth release in collaboration with the enchanting vocalist, Wendy Rule, from Australia, entitled Deep Within a Faerie Forest, that released in September of 2004. This title once again delves deep into the depths of the mystical Faerie realms within the heart of this enchanted musical woodland.

For his latest Fall 2006 release, Fairy Lullabies, Gary has created new instrumental lullaby versions of some of his most beloved melodies. All Music Guide reviewer, MacKenzie Wilson has said, “Garys talents for symphonic wizardry have made him one of the new millennium’s forerunners in new age music.” And we couldnt agree with her more.