You are here: Products Daphne Oram: An Individual Note of Music, Sound and Electronics 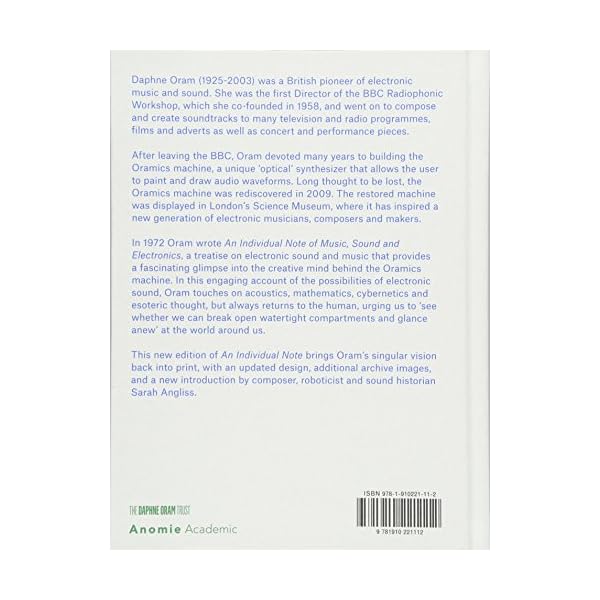 Daphne Oram: An Individual Note of Music, Sound and Electronics

Daphne Oram (1925–2003) was a key figure in the development of British experimental electronic music. Having started as a music balancer at the BBC, she later become the co-founder and first director of the BBC Radiophonic Workshop. Oram left in 1959 to pursue commercial work in television, advertising, film and theater, to make her own music, and continue her research into sound technology. Her home, a former oasthouse in Kent, became an unorthodox studio where she developed pioneering equipment, sounds, and ideas, most famously her Oramics machine – an audio-visual synthesizer offering its own chapter in the history of sound synthesis.

A composer, roboticist, and sound historian, Sarah Angliss is known for her narratively rich electroacoustic music and for her live performance which mixes theremin and ancient instruments with electronics, laptop, and her musical automata. Though her work, Angliss explores the uncanny properties of technology, revealing resonances between European folklore and early notions of electricity and sound. Angliss also creates sound and music for theater, most recently for The Old Vic, Young Vic, and National Theatre (UK). Awarded a Jerwood Opera Writing Fellowship from Aldeburgh Music, she’s currently composing an electroacoustic chamber opera about the life and death of Charles Byrne.